Ralph, My neighbor is a “lefty” of sorts (Obama bumper stickers, gung-ho socialized medicine, “guns should be banned”, etc.). So last week I put this sign up in my yard after one of his anti-gun rants at a neighborhood cocktail party. The sign wasn’t up more than an hour before he called the police and wanted them to make me take down the sign. Fortunately, the officer politely informed him that it was not their job to take such action without a court order and that he had to file a complaint “downtown” first, which would be reviewed by the city attorney to see if it violated any city, county, or state ordinances, which if there was a violation a court order would be sent to the offending party (me) to “remove the sign in seven days.”

After several weeks he was informed that the sign was legal (by a quarter of an inch) and there was nothing the city could do, which obviously made him madder. I tried to smooth things over by inviting him to go shooting with me and my friends at the hunt club but that seemed to make him even more angry. I then asked him if he wanted to go to a Tea Party rally but again he declined my outreach efforts to bring about a better understanding between political and social opponents.

I am at a loss how to reconcile our long relationship (notice I did not say friendship), any suggestions would be welcome. 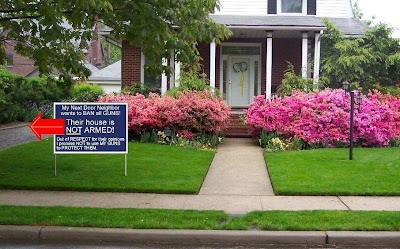