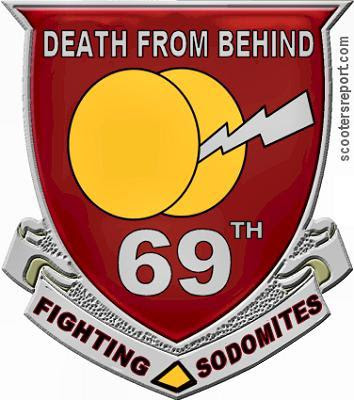 WASHINGTON (SR) — Barack Obama, the first openly-gay president of the United States, has directed the Pentagon to replace the “don’t ask, don’t tell” policy with one that will allow openly gay men and women to serve in the military.

Defense Secretary Robert Gates and the chairman of the Joint Chiefs of Staff, Admiral Mike Mullen, will present details of the plan to U.S. lawmakers next Tuesday.

According to sources inside the Pentagon, changes to be implemented include adding choreography to marching regimens, equipping all dorms with double-wide bunks, new fitted uniforms in seasonal color palettes, the installation of hot tubs, a nd more.

In a potentially controversial move, the Pentagon will announce the formation of a new all-gay, all male company named the “Fighting 69th Sodomites.” Sources credit the creation of the 69th to House member Barney Frank, who has reportedly been working “very, very closely” with gay Pentagon officials.

THEIR MOTTO IS: NEVER LEAVE YOUR BUDDY’S BEHIND!